A timber framer builds his home on a tight budget, trading square footage for space and special touches in a few important places.

Mat and Jessica Robbins' home is the embodiment of the principles of the "Not So Big House." Although their Durango, Colorado, home is not tiny, it was downsized, and they used the savings to add craftsmanship, special rooms and extra space in just a few important places. They used small to make beautiful possible. "Everybody’s got a budget" Mat says. "If all you care about is maximizing space, you're going to be cutting back on the craftsman side of the budget. If you keep your square footage down, you can put a little extra here or spend a little extra there." The timber frame home they built for their family measures about 2,600 square feet, hardly a closet, but not large by today's timber standards.

With three growing children, they needed four bedrooms, but when they sat down to plan, square footage was not their priority. "I told Mat I had three things I wanted," says Jessica. "I want a huge bathtub; I want a huge window where I do dishes every day, and I want a porch I can drink tea on. I didn't care about bedroom sizes or anything like that."

A Russian stove, in which the masonry above the fire absorbs heat and radiates it into the home, can warm the entire house on most winter days. It also provides a striking centerpiece to the main floor. Mat and Jessica own and operate Lorien Timberframes in Durango with a partner, Joe Rohrich. 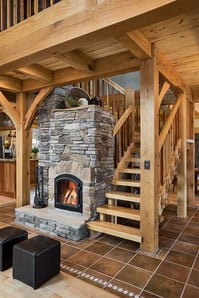 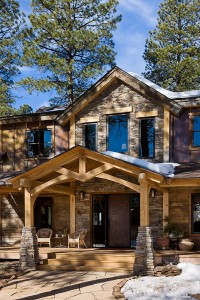 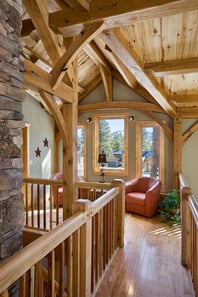 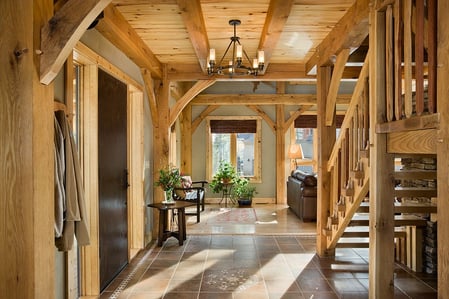 The company designs and builds homes using traditional techniques, fastening frames with hickory pegs and utilizing mortise and tenon joinery – no metal brackets, nails or bolts. Mat has been in the timber framing business since 2000. A philosophy major in college, he says he was originally attracted to the timeless nature of the work. One of his priorities was building green, and a smaller home helped with that goal. "

I was more concerned with making the home as efficient as possible," Mat says. "It's got a passive solar slab and a passive solar design." The home also features a Russian stove, which heats by circulating hot air from a fire through masonry that then radiates that warmth into the air. The stove works so well "we essentially never turn on the radiant heat," he adds. The Russian stove is also a visual centerpiece in the Robbins home, highlighted by Mat's decision to wrap the handcrafted stairs around it.

The custom look avoids a cookie-cutter design while also working both practically and aesthetically. The spiral stair is one of several distinctive touches the Robbins were able to afford by holding down the home’s overall size. An interior stained glass window, a custom range hood and kitchen cabinets, decorative tile laid in special patterns and acid-etched steel exterior siding on the second floor all make the Robbins home one of a kind. Mat believes timber framing is particularly suited to a smaller floor plan.
"You get a lot of architectural interest with the timber frame itself, so you don't need a lot of bump outs and other things people do to make their house architecturally interesting," he explains. He also sees a further advantage. "The open floor plans that you can get quite easily with timber frames allow you to make a smaller house look larger," he notes, adding that the high ceilings also make the home seem larger. "Our home has a great room, and it’s 28 feet to the ridgepole. That really opens up the space."

Jessica says they prioritized the rooms that were important to them and focused on making sure they would be large enough. "We don't spend that much time in the bedrooms. We're an active family. We wanted to focus on the spaces that our family could be together in, and obviously, that's the kitchen and the living and dining rooms, so we put a lot of emphasis on those spaces, and on our porch, where we spend a lot of time in the summer."

Being willing to cut back in some areas can allow money for one special, blowout detail or room. Jessica not only got her big bathtub, she got a striking octagonal bathroom in which the oak timber members meet dramatically at the room's center, while elaborate tile work adds to the character. "The whole master bath is pretty much custom," she says. Mat built much of the home himself, including the main staircase with its traditional joinery. He also acid-etched the second-floor exterior siding and handled much of the custom woodwork.

The house has 13 different types of wood in it. Mat says he wanted to make the house a showcase for what Lorien Timberframes can do with traditional timber framing and woodworking techniques. Mission accomplished — and all on a budget.